Crane, Texas is a small town located in the western part of the state that made headlines last month. With a public high school population of just under 300, the superintendent issued a letter to warn parents about a chlamydia outbreak in the school – more than 20 cases, or one in fifteen students, had chlamydia.  Incidentally, this school district offers a three-day, abstinence-only sex education curriculum in middle school.

Since the story originally broke, the Texas Department of Health announced a correction.  They stated the number of confirmed chlamydia cases was only three, as opposed to twenty, in the three-week period leading up to the recent outbreak news. However, they acknowledged many people had been tested and were still awaiting results which could increase the actual number of cases.  Also, the Health Department did not indicate the age of the three cases that tested positive or those waiting for test results.

Even if the number of confirmed cases of chlamydia is lower than originally reported in this small community, this story raises an important issue that historically brings out strong opinions on both sides: What, if anything, should be taught in a school district’s sex education curriculum?  What can be done to prevent the spread of sexually transmitted infections (STIs)?

Many studies, including those overseen by the Centers for Disease Control and prevention (CDC), support the finding that abstinence-only curricula do not, in fact, reduce the rates of teen pregnancy rates or STIs.  Several evidence-based comprehensive health education programs  (i.e. those that promote abstinence while also providing factual information about contraception and STI prevention) have proven to be effective.  However, there remains a strong misconception by many people in the U.S. that providing developmentally appropriate, accurate information will increase sexual behaviors among teens.  Unfortunately, school districts that take this stance are missing an important opportunity to impart factual information to teens, rationalizing that avoiding the discussion will prevent them from engaging in risky behaviors.  Unfortunately, this hush hush approach is not grounded in research, nor does it offer protection to teenagers who do not heed their lessons in abstinence.

Andrea Brand is a passionate proponent of comprehensive sex education and helping parents embrace their role as open, trusty resources for their kids.  Andrea holds MSW and MPH degrees from the University of Michigan. Now an empty nester, she resides in Massachusetts with her husband and dog.  She is available for speaking, coaching, and consulting. 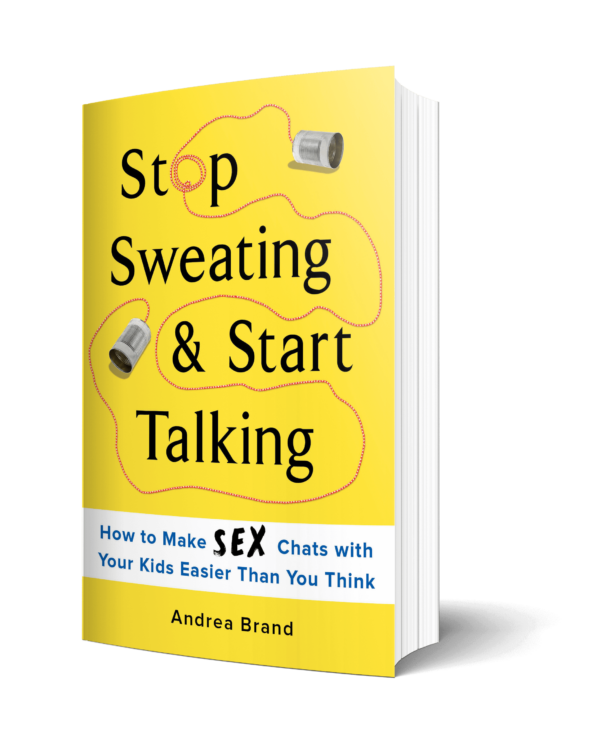 Enter your email to receive a free excerpt of Stop Sweating & Start Talking. You will also receive occasional updates and news from Andrea Brand.

You have Successfully Subscribed!